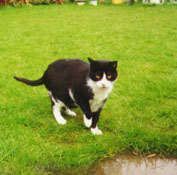 OK, back to normal or almost! I took mum to the nearest eye hospital yesterday and she was seen by a professor no less who after scanning her eye and taking several ultra sound photographs commented, that he thought the spot behind her retina was a blood spot but could not be sure, that he would he would like to see her in six weeks time to measure the spot and see if it had grown any bigger. We are still in the lap of the gods.

After coming home and trying to relax, you need to after trying to park where I have just been, I went into the garden and spotted some old friends. For the last few years a pair of collared doves have been nesting at the bottom of my garden in an old silver birch tree. They have been coming here for quite some time each spring and raising chicks. I know its almost summer when I see them flying about. A few years ago I noticed a young collared dove chick walking about in the garden looking slightly bemused and bewildered. It was being stalked by one of my cats, Claws. Claws was a wily old male cat some 16 years of age and the lord of all he surveyed, this being to the bottom of my garden and possibly a couple of others. Claws was probably quite bemused by fresh meat walking around his turf and I expect sensed an easy snack. In the grand scheme of things I should have left things alone and left nature to its course but when the young chick had hopped onto the rubbish bin into comparitive safety and looked at me with big innocent eyes I felt I had to do something. I knocked on the tilers door, cos he bred budgies and knew a thing or two about birds, and said what would you do? He replied put it in a box with some water and some seed and let it have a good rest and it will probably be all right in the morning, Its just traumatised and tired and lost.

So I put the young bird in a box with water and seed and placed a lid on the box to stop him escaping and then put the box in the garden shed out of any harms way. The following morning the young chick looked quite perky and I took him out of the box and placed him on a table in the garden. I figured if he needs to get into the air then the best thing he could have is a bit of a runway, like an aircraft carrier, and a little bit of a drop so he can soar into the air and back to his folks in the silver birch tree. I left him to it and went inside to make some breakfast. Venturing back outside some 15 minutes later I noticed Claws sat on the back door step with a sheepish grin and some grey feathers hanging from his mouth. In an instant the awful truth dawned upon me that Claws had captured the bird and decided that it was going to be his breakfast. The feeling of guilt was compounded by the realisation that I had merely fattend up his breakfast and gave it a good nights sleep before several pounds of experienced fur, fang and claw had ripped it to shreds. I felt so angry with my cat who after all had merely done what nature had built and designed it for, that I kicked it up and down the garden and did not feed it for a couple of days in the vain hope it would get the message that I was not best pleased.

I am fairly sure that the collared dove pair have forgiven me for the last Faux paux, after all they keep soming back and if its not them then surely they would have told the new occupants that its not a bad place to live provided you can get on with the neighbours? Claws himself passed away a couple of years ago and is buried beneath a catnip plant in the garden. The doves often fly overhead and pass over Claws’ final resting place. Its almost as if they are saying "we are still here you know". Anyway its nice to see old friends and the smell of death has long gone away.