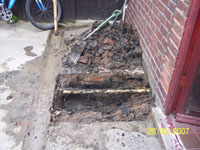 It’s not all fun and games at the Château Ghastanbury, situated in the fiefdom of Higherdew nestled in between the banks of the rivers Mersey and Dee. Oh no we have our moments of drama every now and then. It all started innocently enough, my neighbours had an electrician out for their annual certificate of electrical worthiness. As they rent their house this certificate is a legal requirement on behalf of the landlord. They didn’t get one. No, the young electrician switched the power off there and then and  said there was a slight snag and that the neighbours should ring their electricity supplier and inform them, that there was no incoming earth connection. I only know of this because at 5-30pm a pair of large vans from N Power turned up followed by a smaller van. Several people walked up and down the path and my neighbour knocked on my door to tell me his electricity was going off. It appeared that an earth cable coming into the house was actually not and the electricians could not find the source of where it should be coming from and were waiting for ground plans to arrive. In the meantime a mechanical digger arrived on the back of a truck, just in case they had to dig anything up! By 10-30 pm the electricians had given up their search and said they would resume in the morning, in the meantime my neighbours could not have the electricity on. I gave them some candles and a torch and left them with my best wishes.

The next day after I had spent a morning running some errands for mother,  an engineer from N Power knocked on my door and asked to look at my electricity meter. I allowed him in, showed him where it was and he sighed and then smiled. “I know what the problem next door is” he said. A single supply of electricity had been run to the pair of houses and had entered my house and then it was directed to next doors. This he explained saved a lot of cable by virtue of the fact that there was only one long run to each pair of houses instead of two. The earth cable from my house to next doors had never been fitted. It would be a simple matter to connect next door and the Chateau up to a single cable and my neighbours could have their power back on in a matter of minutes. He left beaming like the baby off the Tellytubbies. After arriving back at mine some moments later with several colleagues and a multitude of tools and assorted implements of destruction he proceeded to busy himself with some cabling in my meter cupboard. After a few moments later he re-appeared looking somewhat ashen faced and announced he had some rather bad news. Who ever had put my own earth cable in had screwed the thing in place so damn tight that it had broken through the protective lining of the live cable and would have to be replaced immediately. He was amazed that the house had not blown up seeing as how the gas meter was next to the electricity meter. The electricity would have to go off until further notice. The engineers then huddled together and after much muttering and murmuring to themselves announced they would have to dig up the drive out side my front door, well actually it’s the path but I do have pretensions! It was now 2-30pm

30 minutes later another couple of engineers arrived with some fierce concrete cutting equipment and proceeded to make a large hole outside the front door. Three hours later and my electricity was back on and the neighbours had power and were safe and now legal. All well and good except I still have this big hole until some one comes to fill it in. It may be sometime on Monday before the ground workers come back to fill it in for you the engineer said as he pulled away in his van. Lucky for the neighbours, what started out as their problem is now mine!

One Reply to “The big hole”