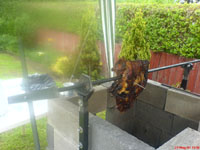 After a great day cooking, It all started to go pear shaped at around eight pm. The food had gone well, everyone was really into the swing of things, it was raining but we did not care however the bourbon had run out! BBB (Big Bad Brad) had stayed sober and offered to take me to the off licence to buy another bottle and so dressed and looking a complete twat I jumped into the car and marched into the off licence. No one said anything but I sorta knew that the counter assistants were dying to laugh but to their credit they didn’t. Armed with a full bottle of Jim Beam I arrived back at the barbie and proceeded to call everyone a poof who would not take a swig. Surprisingly enough most did and the bottle ran out in an alarmingly short space of time. It was now time to open a bottle of Whisky and I had by this time forgotten that I hated whisky but it was a southern theme as I think the photos in the gallery show. By 11 pm The beast started throwing up in the drain and then washed his mouth out with a hose pipe and continued drinking. “That’s why they call him the beast” one wag commented. The fire was raging and the last thing I remember was trying to shove a heavy log onto the dying embers. It would appear that was around midnight. Apparently I fell over, (I have the bruises to prove it) and some one decided to put me to bed.

Legend has it that the party ended at around 3-30am. I got up at 9-30 am to get something to drink and took in the devastation around me. Ted was asleep on the couch, Little miss sunshine’s’ daughter was asleep on the couch in another room and the fire from the night before was still smouldering. The garden lights were still on and the garden itself resembled something from Vietnam that had been hit by a napalm strike. I have no idea what happened between me passing out and the final guest going home. I only knew I could not walk and every muscle I had ached and my brain hurt. There was only one thing for it, I went back to bed. It would only be a matter of time before some of my neighbours either banged on my door or pulled me in the street to complain about the smoke and the noise. One thing is for sure, spit roasting is not hard if you put enough preparation into it but you really cannot do it properly in a suburban garden with neighbours close by. The smoke is horrendous, the aftermath of the fire is something that can only be put right with a lot of time and you need around a ton of timber which is what we went through plus around 40 Kgs of charcoal.

I cant wait for the Rumo smoker to arrive, hopefully that will cause a lot less damage than a spit and be more neighbour friendly.